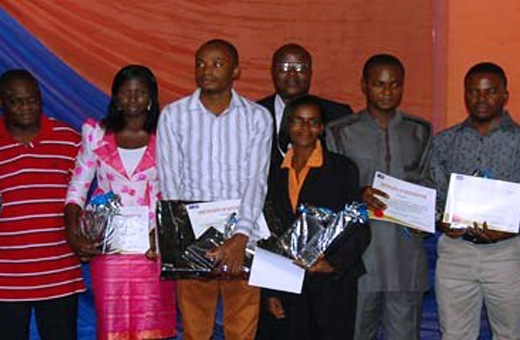 The award winners were unveiled during the award presentation ceremony which took place on August 30 in Abuja, having completed a one year capacity building and mentoring activities aimed at developing the media capacity to bring all education stakeholders to the appreciation of and action towards quality education in Nigeria.

The winners comprise seven state-based journalists from Lagos, Enugu, Kwara, Kano, Kaduna, Jigawa and Abuja as well as two national winners from the state categories; selected from about 140 journalists who participated in the programme within the implementation year (2012 -2013).

According to the project coordinator, Mr Ayodele Adesanmi, the award was aimed at giving a sense of belonging to reporters, particularly those covering development beats (health, education, agriculture etc) and encouraging them to support more development advocacies in Nigeria. He said, ‘the JDP Award 2013 only rewards outstanding education reporters who have contributed to promoting awareness about the Nigerian public education sector within the last one year. It is the second of its kind. The first award - JDP Award 2011 - took place after JDP 1 in 2011’.

While delivering the keynote, the Chairman/CEO Diametrics Ltd, Abuja, Mr. Wole Olaoye charged the journalists to be persistent in their reportage of the sector, ‘the task is at the very root of the raison d’être of our profession. What else is a goat expected to do if not bleat? Or would the honey accept a bribe not to make honey? The task will continue to be done by ordinary men and women carrying out ordinary assignments in the education sector in an extraordinary manner’, he added.

It is noteworthy that the award winners were nominated based on an external evaluation of their primary education reports using criteria such as depth/richness, simplicity, orderliness, investigation /attributions, accuracy, and focus on primary education. Other criteria used include; commitment, number of reports submitted, and proof of publication.

1. Emma Ugwueze won the JDP Award for best report in Enugu. He works with the Moment Newspaper and showed remarkable commitment from the commencement of JDP 2, submitting 9 stories from state capacity building till the end of mentoring. Most of his recent reports, especially the dearth of infrastructure in schools at Ugbene-Ajima community in Uzo-Uwani Local Government Area of Enugu State, have created the desired impacts. The schools are seriously receiving attention at the time the award was given. Apart from infrastructure, he has continued to draw attention to other teacher related issues in the state.

2. Chikezie Omeje won a double award. He won the JDP Award for best report in Abuja and the overall best in broadcast award. Chikezie covers education and health and edits news at Aso Radio, a subsidiary of Abuja Broadcasting Corporation in the Nigeria’s capital. Though joined JDP during the CS-Media Forum in Abuja after submitting his reports on primary education, he was adjudged by the external evaluator and mentor to be a deserved winner.

3. Muhammed Kazaure won JDP Award for best report in Jigawa. He works with NTA Dutse and showed keen interest in primary education reporting.  His analytical reporting style beat two other participants who got to the final stage of the programme.

4. Seyi Taiwo-Oguntuase also won double award - JDP Award for best report in Lagos and national best in print award. Seyi is a reporter with the Independent Newspapers Limited, publisher of Daily, Saturday and Sunday Independent. Her stories emerged the best in a very competitive group of experienced education reporters in Lagos. She submitted five in depth features from state capacity building to Award.

6. Aza Msue, a reporter with National Mirror won the JDP Award for Best report in Kaduna. His keen interest in education spurs him to seek for further knowledge in education sector in 2011 when he graduated with a Post Graduate Diploma in Education, PGDE, Nigerian Teachers Institute (NTI). Aza is known for his feature articles on the state of education in Kaduna State, an effort that put him at a disadvantage with the state SUBEB. Aza submitted 4 feature and 1news story for the award. His commitment is unmatched.

7. Janet Bogunjoko works with Herald Newspaper in Ilorin. She beats two other colleagues at the final stage with her analytical features to emerge as the winner in the state. She submitted a total of five features after the state capacity building to award.