Amputated In Her Mother’s Womb: Story Of Traumatised Day-Old Baby 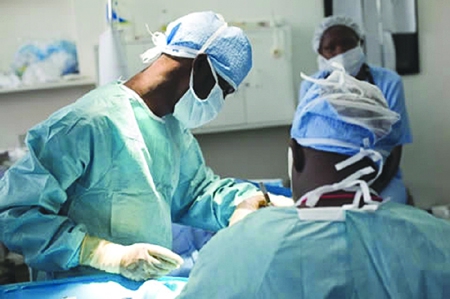 The family of Ibrahim Ajayi (42) and Fatima Ajayi (32) from Danko District of Danko Wasagu local government area of Zuru Emirate in Kebbi State could not believe that their new baby girl will be born with an amputated hand.

But it is a reality that happened not by the natural cause in giving birth but by alleged unprofessional conduct of a principal medical officer, Dr. Jamilu Muhammad, who amputated the hand of a baby girl in the process of carrying out surgery.

The incident occurred on April 19, 2017 when the pregnant Mrs Ibrahim was taken to the Primary Health Care Center in Danko, as she was expecting a baby. On reaching the health facility, the baby was said to be in a position called “Hand Prolapsed,” and the medical officer in charge of the center, Hajiya  Hurraira Garba had to refer the pregnant Mrs Ajayi who was in labour to Martha Bamaiyi General Hospital in Zuru.

Findings by our correspondent revealed that on reaching the hospital in Zuru, Dr. Jamilu Muhammed who is the principal medical officer diagnosed after about 20 minutes of observation that the baby in the womb was dead. He categorically stated that the only alternative to save the mother was bycarrying out hat is termed destructive surgery that involves first the amputation of the baby’s hand. This was even as the mother in labour was insisting that she could feel her baby’s movement in her womb.

At the end, Dr. Muhammed carried out the amputation, then the surgery only to find out that the baby was alive and healthy in the womb.  As a result of what the parents and many people now see as careless conduct by the medical doctor, the baby girl of Ibrahim Ajayi and Fatima Ajayi is now left with a painfully amputated upper left limp. The baby with the amputated hand is now receiving treatment at the Federal Medical Center Birnin Kebbi.

The traumatized mother of the baby girl recounts her experience while she was in labour and what transpired at the hospital in Zuru.

‘’What happened was that when I started labour at home in Danko Village, I was rushed to the General Hospital in Zuru to see the doctor. Even before I reached the hospital I started the painful course of labour and the baby’s limb (one hand) has already started coming out. At hospital in Zuru the doctor said he can carry out an operation for the removing the baby because he said the baby was already dead and that the only way he can remove the dead baby was by amputating the hand and then remove the rest of the body.

“He insisted that the baby was dead and will have to cut the hand of the baby to remove the baby but I could feel the baby moving in my belly. So when he amputated the hand of the baby he now said again the baby was not dead but alive and miraculously within that same time I delivered a baby girl but with amputated limb. I went through hell during that process of amputation in the hands of the doctor, in fact I felt like I was dead because of pains. And after this agonising experience, any time I look at my baby girl with amputated limb, I will cry,’’ the mother said in tears.

Ajayi, the father of the baby narrated that the incident started sometime around 3am. “At about 3 am in the night I brought her to Danko Primary Health Care facility. Unfortunately on getting there, the nurse on duty recommended we should quickly carry the mother to the general hospital in Zuru because he cannot handle the case. He said the doctor in Zuru will be able to either move the hand of the baby back or carry out an operation to bring out the baby, he encouraged us to move to Zuru hospital that things will be ok.

“So when we reached the hospital in Zuru with the mother in this terrible condition, after sometime I was told that the child was dead. It was the doctor who instructed one of my relatives to inform me that the baby was dead. So under this situation we all agreed that he should do the operation to remove the baby in order to save the mother. Then after sometime again, we were told again that the baby was not dead but the doctor has already chopped off the hand of the baby.

“When I heard this information, I was utterly confused, sad and felt dejected, however, I surrendered everything to God.’’  Mr Ibrahim at this point said he started thinking that there was an element of lack of professionalism from the doctor. “Lallai I feel there is some level of unprofessional conduct on the part of the doctor. All I want is justice to prevail, even if the incident was from God, let the concerned authorities do what is necessary in this matter. This is all I can say and I really thank my God.’’

Alisha Nana Ajayi, younger brother to the father of the baby said. ‘’The father of the baby is my elder brother, I brought them to the hospital from the primary healthcare facility in Danko. They referred us to Marther General Hospital in Zuru. They asked us to rush to Zuru Hospital for the operation to be handled by a doctor. So when we reached the hospital we gave the referral note to them, so they went inside and called the doctor that it was an emergency case.


“When the doctor came he entered the emergency room and spent about 20 to 30 minutes. The people that we came with, my brother’s other wife and some relatives told me that the doctor wanted to see me, the doctor approached me and said the baby in the womb was dead and the only way to go about removing the baby was to cut off her hand first. So sensing that the mother was in danger and also looking at the fact that it is his profession we agreed. So he came back later to inform me that the we are lucky, that the baby was still alive but the hand that started coming out has already been cut off.


“He wrote some drugs and asked me to go and buy. I came out and told the people that we came with that the story has now changed. That the doctor informed me that the child was alive, however, he had cut off her hand. I specifically mentioned to them that the baby has been crippled for life. He wrote some drugs and asked us to buy, not even paracetamol was given to us, so we only bought the ones we can afford.


“Because we are very low income earners, we cannot afford the medical bill, I decided with my other relatives in the hospital to allow us carry the mother and the baby back home since the doctor has already stitched the amputated hand so that the nurse will be coming to our home to dress the baby .So we came back. The news of what happened went to town, so some people came and demanded to know what happened, to see the mother, the baby and even the amputated hand that has already been buried.


“Help came to us from Senator Bala Ibn NaAllah, when he heard what happened he sent a delegation to meet us, he directed those he sent to first of all to find out the health status of the baby and the mother and quickly take them both to the hospital for treatment. He emphasized that the baby should be treated first at Federal Medical Center, Birnin Kebbi, that he has paid all the medical bills of both the mother and child. His concern is the health of the baby and mother.’’