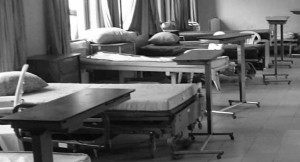 Nigeria’s First Lady, Aisha Buhari, is not accustomed to being economical with the truth. She demonstrated this once more in her fulmination against the abysmal condition of the State House Clinic, Abuja, where she had sought medical remedy recently. She revealed that its X-ray machine was not functional, just as there were no ordinary syringes available.

As help could not come from the hospital, she told her bewildered audience at a forum on Monday, another hospital set up by foreigners came to her rescue.

The clinic in the Presidential Villa is meant to cater for the health of President Muhammadu Buhari, Vice-President Yemi Osinbajo and their families; and other staff of the Presidency and their families. For this reason, it is generously provided with funds in the budget annually. The House of Representatives claims that N10.98 billion was allocated to the clinic between 2015 and 2017.

Aisha spoke at the opening of a two-day stakeholders’ workshop on Reproductive, Maternal, Newborn, Child, Adolescent Health and Nutrition, organised by her pet project – Future Assured. Instructively, her salvo did not spare the Chief Medical Director of the clinic, Hussain Munir, a consultant cardiologist, who was present.

The President has been suffering from an undisclosed ill health that has taken him to London on medical vacations this year – first for 50 days and then 103 days. This sparked much national anxiety. It first began with an ear problem, as Nigerians were told. In all of this, Aso Rock clinic was there just for a window-dressing.

Against this background, the First Lady wondered why massive construction of buildings should be of priority over the provision of basic facilities at the clinic to make it a life-saving and first-class healthcare centre. A clinic where there are no syringes, drugs, equipment and other consumables is a charade.

Her narrative runs thus: “(A) few weeks ago, I was sick as well. They advised me to take the first flight out to London, (but) I refused to go. I said I must be treated in Nigeria because there is a budget for an assigned clinic to take care of us… Along the line, I insisted they call Aso Clinic to find out if the X-ray machine was working; they said it was not working. They didn’t know I am the one that was supposed to be in that hospital at that very time.”

Indeed, the situation is lamentable. In the 2016 budget, the National Assembly approved N2.8 billion out of a N3.8 billion proposal sent to it. In the 2014 Appropriation Act with the heading: State House Headquarters: the purchase of health/medical equipment, received N105.7 million with the code: 23010122. This was followed by N17.5 million for construction/ provision of hospitals/health centres; purchase of mammography machine at N41.08 million; purchase of X-ray machine at N34.1 million – all with code numbers different from that of the N105.7 million for medical equipment. These seem like duplications.

Since money provided for its operations is inversely proportional to services rendered, Aisha has, therefore, demanded a probe of its funds utilisation. This is apt. Her revelation of the underbelly of the clinic came on the heels of an Abuja-based newspaper report that its patients bemoaned lack of drugs and equipment.

It prompted a riposte from the Permanent Secretary in the State House, Jalal Arabi, that it had “some of the best equipment in the country.” But Aisha’s comment bared it all. She was also right with her concern that if this could happen to her in a hospital in Nigeria’s seat of power, what goes on in the wider society could be unimaginable.

This should rank as one of the worst embarrassments confronting the Buhari Presidency, which he must address. With Nigeria’s petro-dollars, put at N70 trillion between 1999 and 2014 by the Nigeria Extractive Industries Transparency Initiative in June this year, the country has no reason not to have world-class heath facilities for the first family and the citizenry at large.