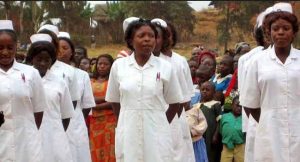 The National Primary Health Care Development Agency (NPHCDA), has deployed 1,447 midwives to rural communities in the northern part of Nigeria for their one year mandatory Midwives Service Scheme (MSS).

At a Flag-Off Orientation and Documentation of Basic Midwives held in Kaduna on Thursday, the Acting Executive Director of the agency, Dr. Echezona Ezeanolue, who declared the induction course open, said the programme was aimed at reversing the ugly trend in the maternal and child health outcomes.

Describing the high rate of maternal and newborn deaths as a national tragedy which requires concerted effort to tackle, Professor Ezeanolue charged the midwives to take the assignment seriously wherever they would be posted.

The deployment of the nurses is under the midwives service scheme, an intervention started since 2009, to reduce the number of women and children who die from pregnancy-related complications.

Since its inception, the scheme has demonstrated progressively to be a strategy for achieving better maternal and newborn outcomes.

However unfortunately, lack of adequate funding has been a major challenge in realizing this objective.

The NPHCDA has already staged orientation for a first batch of 443 midwives in Abuja, the second is taking place in Kaduna, while the third would be conducted in Edo state.

The executive director who identified lack of medical personnel as some of the factors responsible for maternal and child deaths in the country, expressed hopes that the deployment of these nurses to the rural communities will mitigate incidents of pregnant women and child related deaths in those areas.

She called on the midwives to show hard work and patriotism during the service, reminding them that their performance would determine their induction into the Nursing and Midwifery Council of Nigeria.

“It is our believe that the scheme will continue to strengthen the PHC system and have positive bearing on all other levels of care.

“It is important to note that your engagement into the scheme is a pre-requisite for you to receive your license from the Nursing and Midwifery Council of Nigeria.

“This underscores the need for you to be of good conduct to your clients and members of the communities where you will be posted during this period.

“The Midwives Service Scheme has demonstrated progressively to be a strategy for achieving better maternal and newborn health outcomes as well as revitalizing the primary health care system.